Egbert Stolk to be Director of Diocesan Property Services

On July 23, Bishop Dietsche announced the appointment of Egbert Stolk as Director of Diocesan Property Support. He will take up his position on July 31, and will work from an office in Diocesan House, on the Cathedral Close.

Egbert will provide advice and assistance to congregations regarding maintenance and repair of buildings and land, and guidance to them in applying for property support grants and loans. He will also be responsible for overseeing all property owned by the diocese, and for advising me, my staff and the Trustees and Standing Committee on all real estate-related matters.
Egbert comes to the diocese from the New York City Landmarks Preservation Commission, where he has most recently served as Senior Landmarks Preservationist–a role in which he has been responsible for handling all proposed work on New York City religious properties. He graduated from Utrecht University in the Netherlands, and received master’s degrees in military history from the University of Amsterdam, and in historic preservation from the University of Vermont.

The Rev. Megan E. Sanders to be Chaplain, Canterbury Downtown 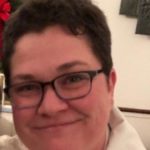 On July 29, Bishop Dietsche announced the appointment of the Rev. Megan E. Sanders as Chaplain to Canterbury Downtown.She will take up the position on September 1, 2019 and will have her primary office at Grace Church, 10th Street and Broadway.

Sanders will provide chaplaincy services for students at New York University, the New School, Pace University, Cooper Union and other campuses downtown, while also serving as Coordinator of the Young Adult Network. She will facilitate regular worship in partnership with Grace Church, providing an Episcopal voice and presence with respect to campus issues. Megan will also participate in the multi-faith, multi-cultural life of the NYU Global Center and the Global Spiritual Life community at NYU.

Megan comes to the diocese having served as rector of St. Paul’s Church, Pleasant Valley, from 2015  to 2019, and as Chaplain to Vassar College.  She has served as Interim Pastor at the Church of Saint Andrew on Staten Island from 2013 to 2015, as Port Chaplain and Tri-State Church Coordinator at the Seamen’s Church Institute at the Port of Newark, NJ from 2008 to 2013, and as Assistant to the Rector for Children and Families in Essex Fells, NJ from 2007 to 2008. Megan grew up in Washington D.C. and the Florida panhandle. She has her B.A. from Flagler College in Saint Augustine, FL and is a 2007 M.Div. graduate of the General Theological Seminary in New York City.

The Campus Ministry Committee shares its excitement in this appointment knowing the gifts Megan brings to this position and rejoices that the Episcopal Diocese of New York places a high and vital priority on campus and youth and young adult ministries!